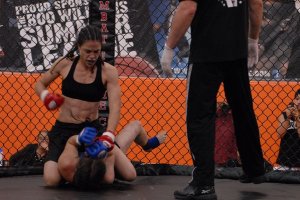 What do you of think Dana White and his stubbornness to Women’s MMA?

Rosanna: I think Dana has a good point, but he just comes across the wrong way saying it. He seems like a blunt person so he’s not going to sugarcoat things to be politically correct. There’s not enough Rousey’s, Tate’s, and Kaufman’s of the world to have a woman’s division. However, it’s getting there. Within the next few years I don’t see how he’ll have any other choice. Plus he’s running out of good male mma fighters that can put on a show. I’ve heard the last few UFC fights were pretty boring. I’ve never seen a boring woman’s mma fight, so if he wants to keep the money and innovation rolling I wouldn’t shelve it the way he has.

New “Ask a fighter” every week on Tuesdays =)